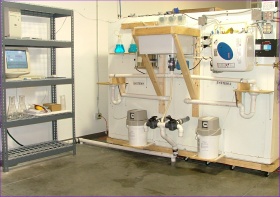 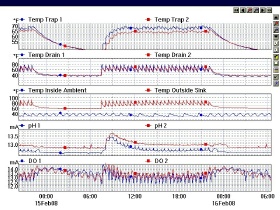 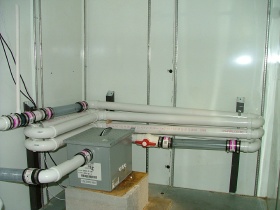 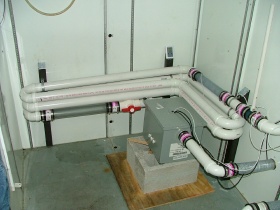 Two schools of thought exist regarding methods for testing and comparing the efficacy of biological drainline maintenance products.

One states that the widely differing environmental conditions present at various food service facilities minimize the usefulness of testing a particular product at one or a small number of locations, and that only laboratory testing under controlled conditions results in valid findings.

The other maintains that, since bioremediation products are used in real-world environments, only on-site testing performed at food service facilities is credible.

The BESTech DSS includes a reservoir into which measured volumes of substances such as dishwasher detergent, floor detergent, grease and hot water are automatically combined. An actuated drain valve at the bottom of the reservoir permits equal amounts of the substances to enter the DSS’s two identical, parallel drain systems at pre-programmed intervals. The two drain systems each consist of an open floor-type drain, a P-trap, more than 30 feet of two-inch drainline and a seven-gallon per minute grease trap. The drainline and grease trap portions of each system are contained inside a walk-in cooler, enabling the simulation of ground temperature.

Sensors measuring temperature, pH and dissolved oxygen are strategically placed throughout both simulated drain lines, and readings from all are logged each minute around the clock. Each of the two simulated drain lines also contains a sampling port to permit sampling of system effluent for laboratory analysis. In addition, sections of removable, transparent drainline are installed at key points to enable visual observations.

The DSS’s twin parallel simulated drain lines permit the testing of two different bioremediation products under identical conditions, or of one product vs. a control (an untreated system). This revolutionary device will be an invaluable tool which BESTech can utilize to conduct its commitment to continuous R&D and product quality improvement.

Fill out the form below to let us know your questions or to get pricing about this product.

OUR PLEDGE TO OUR CLIENTS